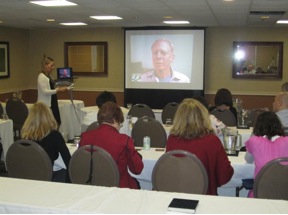 My first ever Skype Sales Seminar
with the South Florida Coaches Association.
“Pay no attention to the man behind the curtain.”

In my book, Become A Client Magnet, there are two chapters devoted to a fictional Sales As Martial Arts class, wherein the wise old blind Master is enlightening the Young Professional.

During one of their interactions, the two discuss the Four Swordsmen of Client Service: Respect, Empathy, Action, and Communication.  When all four are present, there is Trust…and only when there is Trust can there be loyal clients who are willing to refer their loved ones and associates to you.  (The first letter of each of the swordsmen, along with the result of their synergy, create the acronym REACT).

Exploring Communication, the Master and the Young Professional converse about being proactive: e.g. calling a client to update her on the status of something before she calls you to ask about it.  But proper communication with a client requires even more than this.  Clients crave communication that is clean, clear, honest, and appropriate.

A few years ago, I went with a financial professional on one of his client appointments.  The appointment ran very late, but he chose not to call the next client on his schedule to let her know he would have to rebook.  So his second client had to wait, and she went to bed that night resolved to change advisors.  But all this advisor would have had to do to prevent that from happening was make a one-minute phone call.  His communication (or lack thereof) wasn’t clean or clear—it deprived his client of what she craved.

In yet another chapter of Become A Client Magnet, an advisor is proud of the fact that she compelled a client who had not been returning her messages to respond to her by calling him to confirm an appointment that they never arranged.  Others in the room applaud her idea, but I explain how a client who had been reluctant to communicate with her now had justification for his reluctance.  Her communication wasn’t honest, or appropriate; would you want to work with her again?

This week, one of the students in a sales training program I am running surreptitiously joined our small teleclass session, without letting us know he was present, and later commented to the entire group in an email that he thought one of the things I did at the end of the class was “too salesy”.  This advisor bodes fairly well, but these two examples of his poor communication—not identifying himself on the call (not totally clear or honest), and then choosing to muckrake instead of addressing his concerns with me directly (not entirely clean or appropriate)—suggest that there may be some issues standing between him and the success he could be having.

Make your communication clean, clear, honest, and appropriate and deliver it before your clients come looking for it.  It’s what we all crave.

Contact me to bolster your communication and, in the meantime, keep REACHING…